Usage of Idioms in Sign Language for Strong Statements 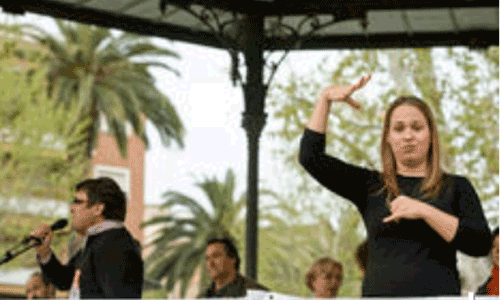 One of the key issues in the deaf and hard of hearing community  is the lack of a universal sign language. In fact, every country has different variations of sign language interpretations. For example, American Sign Language mainly uses gestures of a single hand whereas the British language has both hands in use.

Nevertheless, certain universal gestures (International Sign) are common in sign languages throughout the world. The recognition of the rights of signers is a relatively new development. Uganda was the first country to recognize sign language as an official linguistic in 1995. The United Nations clearly forbids any forcible unification of sign languages from different variations. Currently, about 70 million people worldwide use signing as their first languages. Advanced signers often use different idioms to convey strong feelings.

Apart from the above expressions, a whole range of other idioms are available. Signing requires extensive studying with practical demonstrations and video tutorials. Some of the other expressions used in this unique linguistic include ‘The train gone’ for missed opportunities, puking sign for something disgusting, success, failure, ‘it is my mistake’, ‘it is your mistake’ , ‘why are you staring’, ‘ don’t make me angry’, and ‘I understand’. In the above examples, sometimes the ‘cigarette gone’ gesture also implies a missed opportunity.

Gestures such as making a turtle neck imply the signer is feeling embarrassed and shy. The pride-swallow gesture is also widely common. The most beautiful sign idiom is perhaps the one that says ‘I love you’.

For over 20 years, 360 Translations has earned the reputation as an industry leader by providing high-level interpreting services to hospitals, universities, public schools and more.